Bryant used a series win at Wagner to earn its ninth consecutive regular-season championship in the NEC. (Bryant Athletics)

The Division 1 baseball action in New England held plenty of importance as playoff races heated up during the penultimate weekend of the regular season.

Northeastern’s place atop the CAA’s North Division is well secured, but the Huskies set more program history despite seeing their nation-long win streak come to an end. Speaking of streaks, Bryant continued a nation-long streak of its own in claiming the top spot in the NEC with three more games still to play.

The America East standings are incredibly tight entering each team’s final four-game series, as all three New England teams are separated by a half-game behind first-place UAlbany in the “Division A” standings. UMass Lowell knocked off the top team in the division in its most recent action.

UConn and Rhode Island also picked up two wins as both teams look to solidify their postseason seeds this coming weekend. With conference tournament action quickly approaching, this weekend’s play will begin one day early on Thursday. 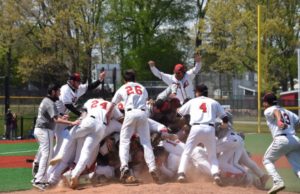