Wakefield, R.I.'s, Mason Feole enters the season with a slew of plaudits, including preseason American Conference Pitcher of the Year.

All but one of New England’s 18 Division 1 teams will be playing ball by this weekend. (Harvard starts on March 1.) With that in mind, our season-opening college coverage on the new baseballjournal.com continues with the unveiling of our All-NEBJ Preseason Team.

The annual team highlights the top players to watch at each position. Nine of the region’s programs are represented this year, including three from a Connecticut team that joined Northeastern in the 64-team NCAA tournament field last spring. In addition, Boston College and Bryant each have two players on the squad.

Without further ado, here is our Division 1 squad: Eight teams have yet to open their seasons, but the top of New England’s Division 1 baseball ranks looks strong one weekend in. Connecticut followed…
Read More 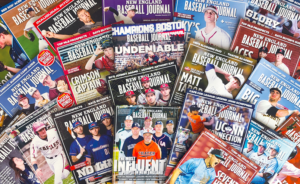